Skip to content
Home/The Impossible Dream: Mat Parker sets out the case for a more inclusive industry
Previous Next

The Impossible Dream: Mat Parker sets out the case for a more inclusive industry

Mat Parker, Account Manager and founding member of the ECITB’s new IDEA Taskforce, considers what inclusion means for both society and industry before asking what the ECITB as engineering construction skills body can do to help tackle the issues and make a difference.

Three different events transpired as I sat down to write something meaningful about inclusion within the Engineering Construction Industry and the evolution of workplace cultures and the power the ECITB has to effect change. 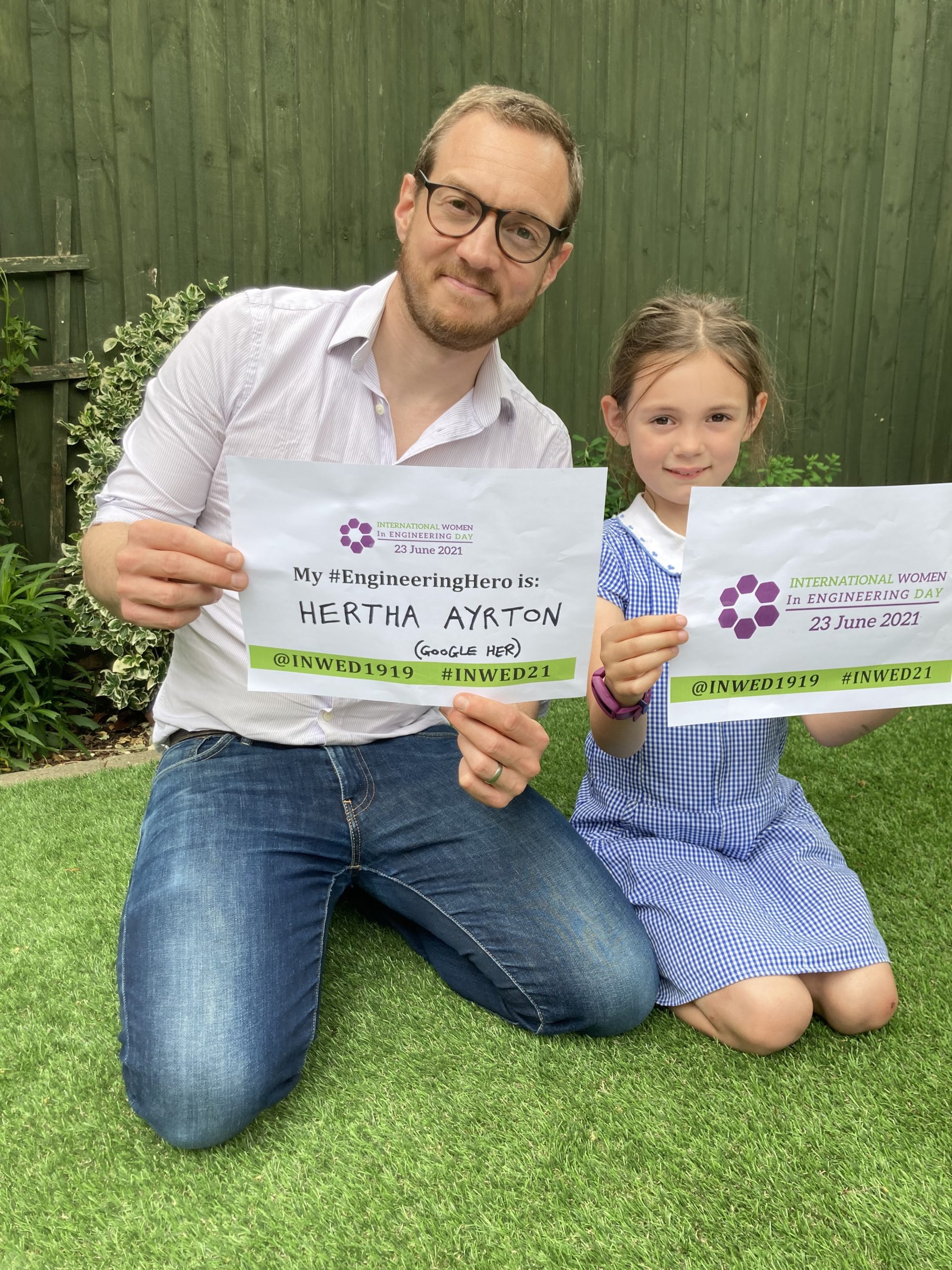 Mat Parker and his daughter celebrate International Women In Engineering Day on 23 June.

Fortunately, whilst all three events were seemingly casual and unrelated the universe placed them in convenient unison so that they might, from a certain point of view, and if one should squint; help me to achieve what it is I set out to do.

The first event was Father’s Day.  It happens every year and this year marked my seventh as a dad.  The day itself did not lead to any life altering conclusions but it did in its quiet moments cause me to reflect on the big things – Am I a good dad?  Will they be okay?  Are we feeding them the right things?  What are we doing to make sure the world doesn’t rob them of their optimism and potential?

The second was an article I read by Wright Thompson, an American sportswriter.  Over the course of the article Wright touched on a number of themes but the ones that stood out to me and what drew my mind back to the matter in hand were the values of inheritance and heirlooms.

It also started to connect the dots with the conversation I had with myself on Father’s Day.  It made me think about what the next generation was inheriting from the ones that came before it.  Yes it was inheriting a plethora of ideas, advancements and achievements.  In many way they were standing on the shoulders of giants.

But they are also inheriting our shortcomings and our failures.  And also those of our forebears.

Every misstep taken, every delay in progress, every shameful moment where somebody could have made a difference, started a debate, stood up for, spoken out against and made a change but didn’t.

When we stand back and take stock of where we are, we inevitably ask ourselves how much further along we could have been if we had just started a bit sooner.  Or turned this way instead of that.

And it’s now that I choose to bring your minds back to the idea of inclusion.

Inclusion is one of those words we hear so much of these days.  It’s not always as easily quantified as its siblings Equality and Diversity but it is in fact the gateway to achieving any success with either.

Inclusion’s greatest enemy though, is often is own universal applicability.  As a society we historically like to put things in boxes and inclusion refuses to be marginalised as an idea.

Generally speaking inclusion is ensuring equal rights, opportunities, status and worth to everyone regardless of things like race, religion, economic background, medical history or disabilities seen or unseen.

In industry, or specifically the workplace, this concept extends to affording equal opportunities in much the same way, particularly in terms of career advancement and progression.  It also pertains creating a workspace accessible for all, ideally during its initial design but where necessary making reasonable and necessary adjustments.

It speaks also to a status quo where every individual feels that their opinions and input, be it in a meeting room or when contributing ideas to wider projects, carry the same weight and credibility as every other person in the room.

Perhaps most importantly is the part it plays in attraction and retention.  If we are to truly foster an inclusive, sustainable and globally competitive workforce we need to widen our talent pool.

One of the key drivers behind every step taken by the ECITB is to help support UK industry in its growth as a globally competitive, skilled, safe and productive workforce.

To make sure this is truly successful, we need as a collective to ensure that the best people are in the room to achieve the best results.

And herein lies the problem.  They’re not.  And they arguably never have been.

For a long time we have collectively been aware that society has failed to break down the barriers that enable marginalisation and discrimination.

We only need look at the world around us in 2021 to realise that there is still so much work to be done before we can start to claim any real victory in this struggle.  And it is a struggle.  But one very much worth fighting.

Mental health is an example of a problem that causes a great deal of damage in our industry because it is not recognised, supported and treated.  Until we reach a status quo where people can share their experiences of mental health issues in the same way a colleague can share experiences of physical injury without fear of damaging their careers or working relationships we will continue to marginalise and force our greatest innovators and leaders into the shadows.

This is of course one example and doesn’t begin to scratch the surface of every other group marginalised and excluded because of who they are, where they come from or what they might look like.

A long way to go

I’m reminded of the Mercury 7 astronauts who were at the forefront of the US efforts in the great “Space Race” of the 1960s.  These men represented the best and brightest of their generation.  They passed the most demanding physical and psychological testing ever conceived to determine whether they had the potential to advance human progress towards the stars.

Now I’m a big fan of the Mercury 7 astronauts and hold them in the highest regard.  But here’s the thing; they were all white men, of a certain age and from a certain background.

And whilst they were all brilliant in their own right we will never know if the very best were actually sitting in those cockpits when took those steps towards new frontiers.

For reference, there were indeed a group of women who went through the same rigorous testing as their male counterparts and endeavoured to join the space program.  They were privately funded and were called the Mercury 13.  They were aviators, engineers and pioneers in their own right.

They were qualified, competent and able.  And they were ultimately laughed out of the room.  This happened in recent history.  We’ve come a long way.  Thank you Valentina Tereshkova and Svetlana Savitskaya and Sally Ride.

But we’ve got a long way to go.

Citing the Royal Academy of Engineers , the UK has a lower proportion of female engineers than any other European country.  Only 8% of the engineering workforce is made up of female professional engineers.  When you factor in that 51% of the working age population is female it raises as many concerns as it does questions.

And again this barely scratches the surface.

But as important as it is to reflect on how we got here we need to spend as much if not more time now looking at where we go from here.  Otherwise we will be standing in the very same spot asking the same questions and reflecting on the same mistakes 50 years from now.

What can the ECITB do?

Looking again at our own industry and the role the ECITB can play in forging the path ahead we ask ourselves what it is we can do with the powers at our disposal.

Through our engagement with training providers, industry, government and the education sector we can help ensure that the necessary change is implemented at the point where it can effect long term, substantive change.

Learning and development is critical in enabling culture change.  Embedding the idea of inclusion in every aspect of education from training standards and qualifications to the usage of inclusive language in training materials can help plant the seeds of progress.

But we have to be mindful that this is not just a box ticking exercise and that change is plotted and measured every step of the way so that the next generation does not inherit the problems and limitations imposed on us.

By responding to industry trends and requirements we can support, though grant funding, that very training which is critical on this path to success.

Throughout our history the ECITB has been a great facilitator.  We thrive on our ability to empower conversations between stakeholders from across industry sectors and policy makers that have the capacity to spotlight these issues and nurture a collaborative environment.

And it is only through collaboration that true inclusivity can be achieved.

And it’s here that we find our best hope toward achieving what Andy Williams called the Impossible Dream.  In the early part of 2021 the ECITB launched the Innov8 group.

The Innov8 Group, which references the eight sectors of the Engineering Construction Industry, is comprised of individuals from within industry that are in the early stages of their career journey.

Equally the IDEA taskforce is an embodiment of the ECITBs commitment to bringing about positive change to our industry and its workforce.

IDEA was created to help ensure that diversity and inclusion awareness is embedded in ECITB training standards, raise awareness and showcase diversity in action and promote the industry as an appealing career choice for all.

From the outset these groups have abandoned pretence, embraced their diverse make-up and sought to engage with each other with ever increasing originality.

It is here, by facilitating engagement and collaboration that we truly lay the foundations for an equitable tomorrow.

I’ll close this sermon by revealing the third event that brought us to this point.  And for me it’s the one that brings home the “why”.

I was out walking the dog with my seven-year-old daughter a couple of nights ago.  On our way back home we passed a house that was displaying the Pride flag in the downstairs window.  At first glance my daughter thought it was an NHS rainbow.

I took the opportunity to explain to her that it was actually for Pride.  She didn’t know what Pride was so her dad fumbled his way to eventually explaining that it was a celebration of love.  And equality.

With all the grace and innocence of a child she embraced this idea wholeheartedly.  I then thought it only right to tell her that not everyone agreed with this and she quite rightly asked why.

I did my best to justify the reluctance of others to accept inclusiveness by explaining that some people have a hard time moving on from the ideas of yesterday.

As we turned into our road she looked up at me and delivered the following, beautiful, logical, undeniable truth;

“Yesterday was yesterday and today is today.  We can’t get to tomorrow if people can’t let go of what came before”

Mat Parker is ECITB account manager for the EDP and South of England region.